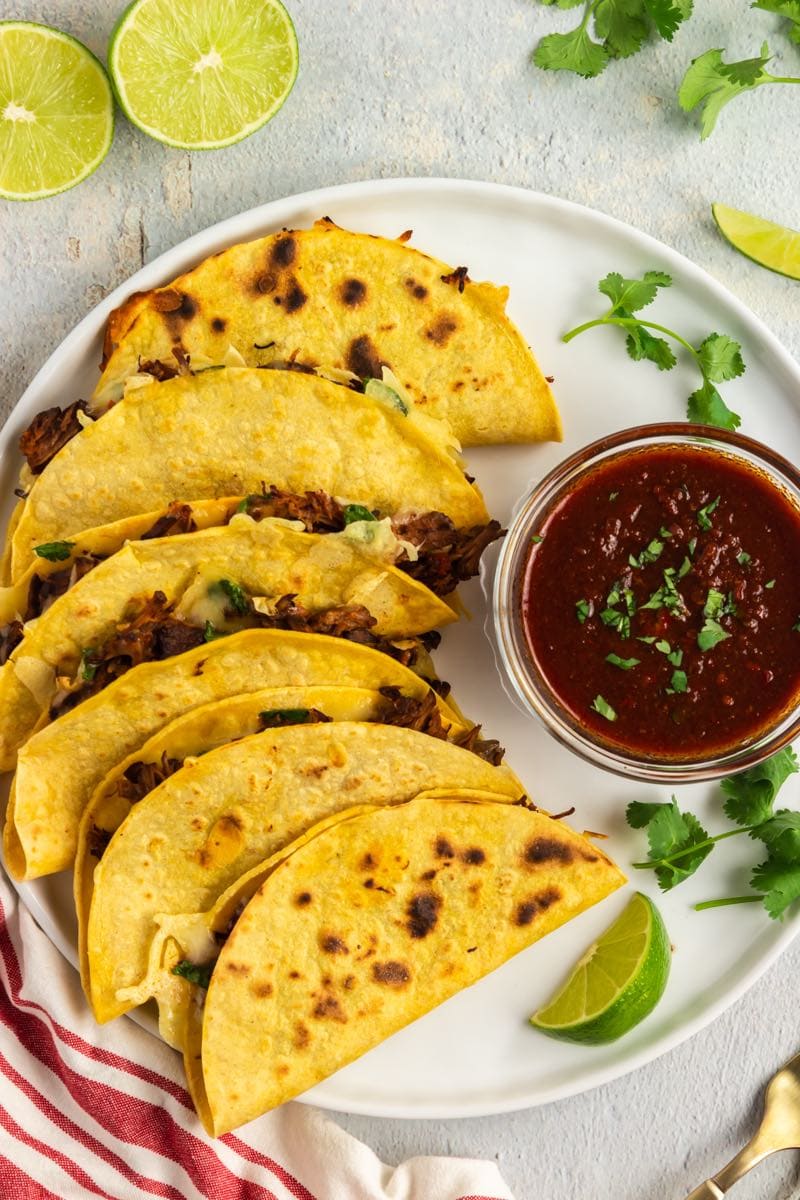 These Quesabirria tacos are made up of tender birria meat and melted cheese, wrapped in a crispy pan-seared tortilla! Made in just one pot and minimal prep required, use the meat to make birria tacos too!

When it comes to Mexican food, it’s safe to say we are huge fans.

On an average week in our house, we would easily have quesadillas, enchiladas, and tacos for dinner one night. It also wouldn’t be uncommon to pair it with some nachos too.

There are times, though, where we want to be a little bit more fancy and put in that extra effort. Instead of our usual tacos or quesadillas, we go all-in and make quesabirria tacos.

What are quesabirria tacos?

Quesabirria is a Mexican dish created in Tijana. Quesabirria tacos are large tortillas filled with birria beef and cheese, then cooked on the stove until the cheese is melted. This is different to birria tacos, which use corn taco shells or soft tacos for the exterior.

Why this quesabirria tacos recipe will be family favorite-

Can we just lament on how delicious birria meat is? It’s tender, moist, juicy, and literally MELTS in your mouth. It’s slightly spicy without being overpowering.

What I love about this recipe is just how flavorful it is. It has always intimidated me to try the more time-consuming Mexican dishes, but this one proved just how easy it is. Quesabirria and birria tacos are now my go-to dish to make when I’m entertaining and everyone begs me for the recipe afterwards!

What is in a QuesaBirria taco?

For the birria meat

For the quesabirria tacos

How to make quesabirria tacos

Start by adding the chiles, onion, tomato, garlic, and beef broth into a large pot and placing it over medium heat. Bring it a boil then reduce the heat to low and let it simmer for 15 minutes. While the broth mixture is simmering, prepare the beef. Add the oil to a Dutch oven and once hot, sear the beef on all sides until no longer pink.

Next, remove the liquid mixture from the heat. Using a stick blender, puree everything together until smooth, then add it to the Dutch oven. Add the salt, pepper, apple cider vinegar, coriander, and bay leaves and bring everything to a simmer. Once simmering, remove from the heat and transfer it into a preheated oven and cook for 3 hours.

Now, once the birria beef is done in the oven, remove it and shred the meat with two forks before assembling into quesabirria tacos. Place the tortillas onto a flat surface and generously fill one side with the birria meat. Add the shredded cheese and a sprinkling of cilantro and fold in half. Place a large non-stick pan over medium heat. Once hot, add the folded tortillas to the pan and cook for a minute each side, or until golden and sizzling.

The beauty of this dish is that the beef can easily be used to make the viral birria tacos.

To make birria tacos, prepare the birria beef as instructed. Once it has cooked in the Dutch oven, add them to corn tortilla shells or in soft taco shells. If you choose the latter option, place them on a skillet or griddle to crisp up on both sides.

What to serve with birria beef?

Is QuesaBirria a goat meat?

While some recipes for Quesabirria or birria call for goat meat, the best protein to use is beef, specifically beef cheeks or beef chuck roast.

Although Quesabirria tacos contain multiple dried chiles, they don’t actually make the dish overly spicy. They give the dish a slightly spicy kick, but really provide a delicious sweet flavor, that balances out the beef broth.

What exactly are birria tacos?

Birria tacos aren’t overly different to quesaBirria tacos. What sets birria tacos apart is that it uses soft or hard shell tacos instead of a tortilla.

Well cooked birria should NEVER be chewy. Rather, it should be soft and fall apart when shredded with a fork.

What is the difference between Birria and Quesabirria tacos?

There is no actual difference between the two- Birria simply refers to the stewed meat, which makes up the filling for the tacos.

For the birria meat

To make the Quesabirria tacos

TO STORE: Leftover birria meat should be stored in the refrigerator, covered, for up to one week.
TO FREEZE: Place the cooked and cooled meat in an airtight container and pour the sauce on top. This can be frozen for up to 6 months.
REHEATING: Microwave the meat for 30-40 seconds or reheat in a small saucepan until hot.